skip to main | skip to sidebar

I have new website/blog at wordpress now, which allows me to use fransdewaard.com, so I moving to there and this is the final post here... follow me...
Posted by Kapotte Muziek at 12:56 AM No comments:

Posted by Kapotte Muziek at 2:45 AM No comments: 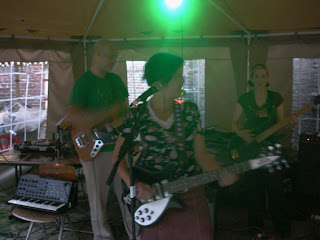 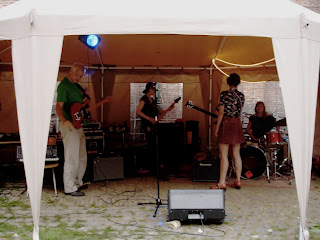 Ok, so when I started to create music 25 years ago, the one thing I never was really interested in was playing in a band. Getting every week together in some stinky rehearsal space, to do those same songs over and over again, just simply seemed a drag. But then I never counted on no wave. One of my local favorites is the Titmachine who play a bunch of covers. Pascale and Jodi who play bass and drums pretty much keep things together and Jana screams the lyrics, while Djarmilla absolutely can't play the guitar but with a distortion pedal: who cares. So, I saw them a couple of times and their funny inept playing makes a great performance.
This week local synth pop meister Bertin said he and Titmachine would be playing at some art-do in 's-Hertogenbosch and said he place in the car for me, so why blow a chance to see the machine again? When we arrived it turned out that Djarmilla couldn't come, so Pascale and Jodi (while waiting for Jana), asked me to play her guitar... I said I never played guitar, let alone in public, it was even better for their no wave. I tried to lie a way out if, by saying I didn't know which songs they would be playing, but then got an ipod handed: go ahead and have a listen. So with a distortion pedal full on during the soundcheck, I decided to do it. It was pretty nerve racking, but its really like improvisation: you just react to what others do and try to stop all at the same time. There is a short film, which I will try to get hold of, but for now Bertin's pictures to proof the event.
Posted by Kapotte Muziek at 12:52 AM No comments: 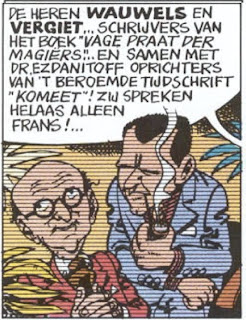 I 'forgot' to tell you that the first release by Ezdanitoff was released by My Own Little Label, but this week Redbol, while designing the cover for the Kapotte Muziek 25th anniversary live cd (more later), gave me a bunch of comic books, digitally. Included was Agent 327 and the first one I read was 'Dossier Zevenslaper' and on page one we come across a small tribute to Herge's Ezdanitoff, see picture above. Order a copy of 'Komeet' here
Posted by Kapotte Muziek at 1:27 PM No comments:

No doubt I get into big trouble for posting this. June 11 at Extrapool Phil Milstein talks about Songpoems. This where people write a lyric and a band plays ad lib music to that. You could get in for free that night by handing a lyric. I was there with Elise, who didn't write anything when entering but then had an idea for a lyric. I wrote it down together with her name and lo and behold it was performed later that evening, of course with her name being part of the lyric. So I repost that song, about a cat, here
The complete concert by Moon About can be heard here
Posted by Kapotte Muziek at 2:20 PM 2 comments: Corona Rewind is the name of my latest release. I have been back in contact with Mark Schomburg, to some better known as Abo, and also the person who released the second Kapotte Muziek 'Utilities' in 1991. Off and on he returns and now he's back releasing tapes on his labels Incubator and Petri Supply. One of his old, ongoing projects is Composcila, in which he send some recording of 'electrical plasma' to the oldest person to remix, which I believe was David Lee Myers. Then it went onto Jeph Jerman, AMK, Achim Wollscheid, me - or maybe in a different order, it has to do birthdays. I remember doing a remix of it by playing a four track tape on end, so the whole remix I did lasts over an hour. I no longer have a copy. But the four track tape I still have, so on queensday I went into my studio and did an impromptu mix of that, resulting in a pretty dense and noisy piece (actually three). Mark did a really nice cover and its available in an edition of 100 copies. No website, but write to Mark:
Posted by Kapotte Muziek at 9:54 AM No comments:

I could bore you with some talk about how the concerts were in Rotterdam and Venlo (they were great actually, but also tiring, especially a long weekend in Venlo), but this is about something else. My father was born in Venlo and through a surviving brother of his, I found where he was born and which other street they lived. The first curious coincidence is that the B& B Roel and I were staying was on the same street as my father lived after moving from the street he was born. Sunday morning we spend driving to both addresses, and then went for a coffee at Roel's parents, who still are in nearby Velden. We talked a bit about my father and the fact he lived in Venlo and after a while, Roel's father asked me wether I knew 'a Jopie de Waard'. Obviously we referred to him as Joop de Waard, but I am aware in his childhood he was called Jopie. So I said he was my father and it turns out Roel's father and my father went to the same school in their childhood days. What wonders me, later on, is the fact that my father knew Roel Meelkop, but never mentioned he was in a class with Mat Meelkop - I am sure his memory didn't store that after all these years. Now we can no longer ask him.
Posted by Kapotte Muziek at 8:04 AM No comments: